In the Brooklyn Heights home of Norman Mailers family, a wake for the late author is in progress. The Widow of Norman (Joan La Barbara) greets friends and members of the New York City cultural and literary community. Music is performed throughout the house as guests, family and the (unseen) undead interact. The spirit of Norman I (John Buffalo Mailer) emerges from the River of Feces, the mystical channel beneath the family brownstone through which the undead must pass. Norman I ascends the stairwell and enters his own wake. He is greeted by his Ka spirits (Matthew Barney and Aimee Mullins) who welcome him and accompany him through his visit. In a flashback to a ritual held at a Chrysler dealership in Los Angeles, the spirit of Norman I is evoked in the form of a damaged 1967 Chrysler Imperial. A drum and bugle corps-led musical procession accompanies the Imperial to its final resting place in a showroom in the depths of the dealership. Back at the wake in Brooklyn, Norman I, unable to communicate directly with his widow, makes the acquaintance of the reigning Pharaoh, Ptah-Nem-Hotep (Paul Giamatti), who envies Normans earlier experiences in the court of the great Pharaoh Usermare (Stephen Payne). The two men exchange commonalities, including their mutual reliance on sorcery (they confess to one another that both use human feces as a means to accumulate knowledge and power) and Ptah-Nem-Hotep reveals to Norman I that he believes himself to be a weak Pharaoh. Norman I greets Hathfertiti (Madyn G. Coakley) who has served him as a medium for his rebirth. He follows her into the bedroom and she leads him to a portal back to the River of Feces where his resurrection can take place. 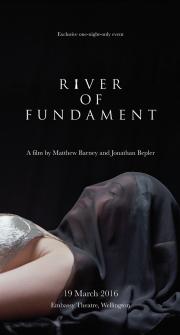